AORTA—The Association of Oregon Rail and Transit Advocates—is a 501(c)(3) non-profit citizen advocacy group working to educate the public about the need for safe, fiscally responsible, environmentally sound transportation. It is also known as the Oregon Association of Railway Passengers (OreARP). AORTA works cooperatively with the national Rail Passengers Association (RPA) while maintaining its autonomy.

AORTA is actively working to restore, and even expand, passenger rail service to Eastern Oregon.

AORTA is not just about rail passenger service. Its members recognize the need for balanced transportation services using all the modes appropriate for the area, the environment, the population served, and the funding available for such services. These include rapid transit, light rail, and bus. A comprehensive multi-modal transportation system will also lay the foundation for high-speed rail in the Northwest, a long-term vision that AORTA supports. 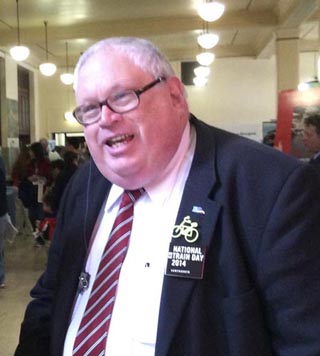 AORTA mourns the passing of Donald Leap, who died on 16 September 2021, after a three-year-long battle with cancer. Donald was a strong advocate of rail transportation, beginning in his youth, with membership in the Pacific Northwest Electric Railway Association (PNERA), founded in the 1950s and predecessor to AORTA (originally called the Oregon Association of Railway Passengers). Over the years, Donald came to be one of AORTA’s most knowledgeable advocates for rail transportation, serving on our board, including more than one term as president, and in other rail advocacy organizations, in various capacities—most recently as passenger rail representative to the Oregon Rail Users League (ORULE). Donald was busy developing ideas for advancing rail projects even into his last weeks.

Donald was also extraordinarily knowledgeable in other fields, including photography and history—not just rail history, but local, national and world history. He spoke several languages—Russian and related Slavic languages (Polish, Bulgarian), Arabic, Korean and German—utilizing this skill in his work as a journalist and in sales of high-end products, including for some international corporations.

With his outgoing personality and extensive knowledge of history and international issues, Donald was able to reach out to, and communicate well with, people from many cultures and walks of life. His warmth, energy and passion for life will be missed, not just by rail advocates but by many friends and associates.

AORTA expresses its deep appreciation for Donald and all he did over the decades to promote passenger rail and to serve and support our organization. We offer our condolences to Donald’s widow, Teresa Leap, and other family members and close friends.

AORTA encourages the development of a balanced and integrated system of transportation.

Join, renew your membership, and donate to AORTA.

Tell your elected representatives that you support modern, efficient rail service in Oregon.

News from AORTA about rail and transit.

Other sites of interest to Oregon rail and transit advocates.